The transformation of the automotive industry enters the next stage

20. July 2021 | magility
Digitization and artificial intelligence are the two drivers that, individually but also in combination, have the potential to fundamentally change the business models of the automotive industry!

The automotive industry is undergoing a profound transformation. Digitization and artificial intelligence are the two drivers that, individually but also in combination, have the potential to fundamentally change the business models of this industry. Back in 2018, we pointed out in our article “Smart Mobility- where is the journey of mobility heading?” that traditional carmakers will have to adapt their business models, because components that cannot be digitally controlled or integrated are no longer relevant for automotive manufacturing today. “Smart mobility” as a key element of the “smart city” is the order of the day, i.e. the increasing networking of transport infrastructure and means of transport, and only vehicles designed to match this integration are still marketable today. OEMs are making correspondingly great efforts to keep pace with developments and to influence and shape them through technical innovations and the adaptation of their business models. However, in doing so, especially with regard to the all-dominant topic of autonomous driving, they are encountering fierce competition from established IT giants, which is ensuring that there is a growing willingness to enter into strategic collaborations in important fields.

As a result of the advancing digital transformation and the increasing use of artificial intelligence, the entire automotive industry and its whole supply chain is undergoing a transformation process of unprecedented proportions. In this process, artificial intelligence offers completely new possibilities for adapting to the individual needs of vehicle owners and drivers. Functions such as the designable on-screen cockpit, voice control, control panels or touch screens for controlling interior functions such as heating, seats or navigation play a central role here. These technical innovations contribute to the fact that the car has long since grown beyond the stage of a simple means of transportation.

Last year, the software and technology company CARIAD was launched, a subsidiary of Europe’s largest automaker, the Volkswagen Group. CARIAD aims to accompany Volkswagen’s transformation into a digital, software-based mobility provider. This includes, among other things, the development of driver assistance systems and the software for autonomous driving. Furthermore, the focus is on increasing VW’s innovation speed, which should initially lead to a new automotive experience that seamlessly integrates into our digital world.

“The transformation in the automotive industry over the next ten to 15 years will be incomparable to what we have seen so far” (quote Volkswagen CEO Herbert Diess).

According to the Volkswagen Group’s own statements, 4,000 developers, engineers and designers from Audi, Porsche and Volkswagen are currently working worldwide on a uniform, central software for the vehicles of the entire Volkswagen Group. The uniform operating system is expected to find its way into all Volkswagen Group models starting in 2025. By that year, the number of employees is expected to grow to around 10,000. Almost 2.5 million EURO will be invested annually in the CARIAD software.

Current challenges for the automotive industry

In addition to the transformation to electromobility, advancing digitalization is causing fundamental changes in the automotive industry. While electromobility is exclusively about CO2-saving drive options, digitalization represents a more profound change for customers and, beyond that, for the entire mobility industry. Consequently, business models will change fundamentally in the future. This also becomes clear when looking at statistics that show how the distribution of sales in the automotive industry will change by 2030. 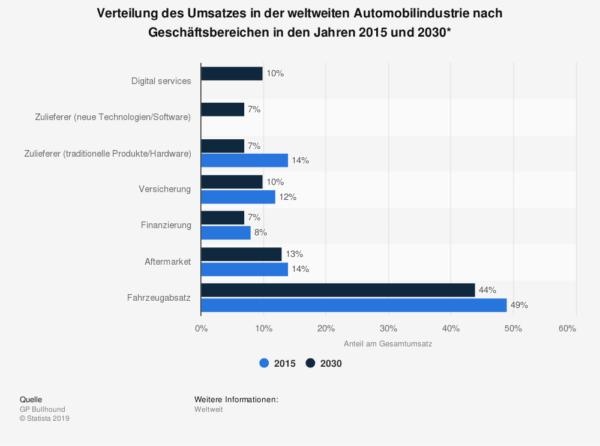 The statistics shown clearly indicate that digital services as well as new technologies and software solutions, which previously played hardly any role in the automotive industry, will account for a significant share of global automotive sales by 2030.

In the mobility services sector, the two competitors BMW and Daimler are entering into a strategic alliance to cooperate in some business areas in the future. The aim of their cooperation is to drive forward automated driving. By networking the expertise of the two technology leaders, the aim is to generate tangible benefits for customers as well as cost savings. As early as 2025, the first self-driving cars from Daimler and BMW are expected to be on the road on highways and parking without human control, i.e. with autonomy level four of five of the so-called SAE levels. The SAE levels describe how independently and autonomously a vehicle can act in road traffic. Level four includes complete control and monitoring on highways and when parking – but in city traffic, the driver must still intervene himself, which is why the steering wheel and pedals must still be present.

BMW and Daimler board members agree:

“Instead of individual stand-alone solutions, we are concerned with a reliable overall system that brings tangible benefits to our customers”  (quote Daimler CEO Ola Källenius)

Waymo in first place in the transformation to autonomous driving

Waymo was launched in 2009 as Google’s self-driving car project. For several years, Waymo has been involved in the future operation of autonomous vehicles and holds the leading position in this sector.

“We are building the world’s most experienced driver” (quote on Waymo website).

Waymo’s vehicles have already been tested several times on public roads, numerous traffic situations have been recreated, and the collected data from these journeys has been evaluated and used for further developments. This is therefore not a driver assistance system in which the driver is still actively at the wheel, but a fully autonomous technology. The “Waymo Driver” has full control from pickup to destination. Using a perception system that decodes complex data collected by multiple sensors and accurately captures the environment, it can detect and identify pedestrians, vehicles, stop signs and more. The goal is to make traffic on the roads safer and easier. Since April 2, 2018, the first self-driving vehicles, without a driver behind the wheel, have been registered in the US state of California – so far without any major incidents or traffic accidents.

Apple as a serious competitor of the future?

What is certain is that the software in the vehicle will become one of the most important revenue generators in mobility in the future. Autonomous driving will make an important contribution to individual mobility. For this reason, it would not be unlikely for the IT group Apple to enter the automotive industry. Its distinctive software competencies could open up new opportunities and doors for the technology company. Reports about the probably planned “Apple Car” have been circulating for 2 years already. When and whether an electric vehicle from Apple will actually reach market maturity is currently still written in the stars – but it is not unlikely!

Summary in a nutshell

The digitized automotive industry in 2030 – an outlook

If we allow ourselves a leap in time to the year 2030, the automotive industry could look like this:

As a result of digitalization, the automotive industry is facing a decisive transformation: car manufacturers are being driven to adapt their vehicles to the spirit of the times and to rely on new digital business models. The trend toward autonomous driving is becoming increasingly relevant: Currently, we are still at the stage of partially automated driving using assistance systems. In some vehicles, you can already find functions such as automatic overtaking of other cars, automatic lane changing, and the ability to leave braking and parking to the vehicle without the driver’s influence. However, fully autonomous vehicles can so far only be used on test tracks with special permission. Yet, the full-scale deployment of autonomous vehicles is already being planned. But it is still uncertain when the necessary infrastructure and legal framework will be in place. We at magility will be happy to keep you up to date on further developments in the automotive industry. The transformation is picking up speed, and we are right in the middle of it. If you have any questions, please feel free to contact us!