Synthetic fuels – Energy for the future

Synthetic fuels – Energy for the future

In order to achieve the climate targets, CO2 emissions from transport will additionally have to be reduced significantly in the coming decades. In addition to electromobility, highly efficient combustion engines powered by synthetic fuels (so-called e-fuels) are a promising way forward.

Synthetic fuels are generally seen as a technology that will play an important role in achieving net zero in the transport sector. Terms such as “biofuel,” “synfuel,” and “e-fuel” are often used interchangeably. However, the various types of synthetic fuels differ significantly in terms of their production, scalability, and sustainability. Synthetic fuels are liquid fuels that have essentially the same properties as fossil fuels, but are produced artificially. They can be used in the same way as fossil fuels, which are used all over the world. For example, it is possible to make synthetic jet fuel, diesel or gasoline for conventional planes, ships, trucks and cars. The main difference between fossil and synthetic fuels is how they are produced: Fossil fuels are created over millions of years underground from organic material that is converted into coal, natural gas or oil. Synthetic fuels are produced by mimicking these natural processes from renewable resources.

The key to producing synthetic fuels is synthesis gas (syngas), a mixture of hydrogen (H) and carbon monoxide (CO). Syngas is the universal building block needed to make any type of liquid hydrocarbon fuel such as jet fuel, diesel, or gasoline. The conversion of syngas to fuel is an established industrial process that has been used on a large scale for decades, using coal and natural gas as feedstocks. However, this is again unsustainable. And this is where the challenge lies: producing syngas sustainably. A large amount of energy is needed to produce syngas. To produce it sustainably, this energy must come from a renewable resource such as biomass, sun, wind or water. 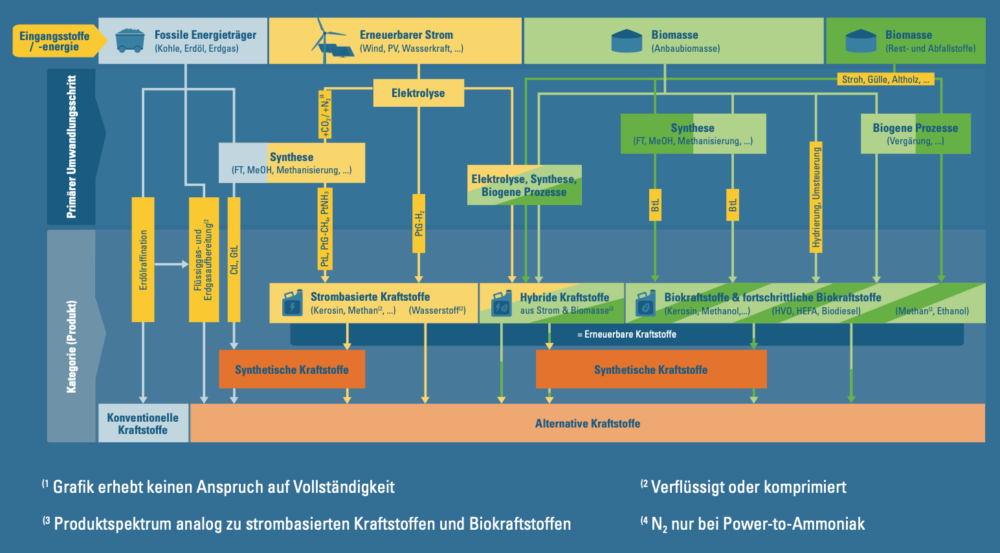 What are the types of renewable synthetic fuels?

While there are several processes for converting biomass into liquid fuels, the most scalable and versatile in terms of feedstock is biomass gasification, also called “biomass-to-liquid”. More specifically, biomass is converted into syngas at high temperatures. The heat input required for the process is usually generated by burning some of the biomass itself. Feedstocks can be cultivated plants (i.e., energy crops such as corn or sugarcane), algae or waste biomass. Biofuels are the only type of renewable synthetic fuel already available on the market in small quantities. They are often criticized because they compete with the food industry for arable land, consume water, and have limited scalability.

E-fuels are produced from renewable electricity such as solar, wind or hydro power. The power-to-liquid process is based on a series of energy conversion steps. First, renewable electricity is generated, which then drives an electrolyzer that splits water into hydrogen and oxygen. Next, the hydrogen is mixed with carbon dioxide and converted to syngas via reverse water gas shift (RWGS) – a process that occurs at high temperatures and is powered by electricity. Several projects are planned, but so far there is no industrial e-fuel plant, which also means that e-fuels are not yet available on the market. E-fuels can be produced with any type of renewable electricity, so theoretically they could be produced anywhere in the world. However, electricity storage for continuous operation remains a challenge, limiting application to a few regions with an exceptionally cheap and continuous supply of renewable electricity, or requiring the integration of expensive battery technology.

Solar fuels are produced from solar heat, which drives a thermochemical reactor. This process is also known as “sun-to-liquid”. In the reactor, carbon dioxide and water are converted into synthesis gas. Until now, solar fuels are not yet available on the market. Sunny regions offer ideal conditions for the production of solar fuels, especially deserts and semi-arid regions with high solar radiation. Solar heat generated during the day can be stored by low-cost thermal energy storage, enabling fuel production round-the-clock. Storage makes solar fuel plants self-sufficient and independent of a grid, so they can be deployed quickly and on a large scale.

Where can synthetic fuels be used?

Renewable synthetic fuels are widely seen as a solution for decarbonization, particularly of those transportation sectors that cannot be electrified. Long-distance transport requires energy carriers with a very high energy density and will therefore continue to rely on liquid fuels. Batteries are too heavy and bulky for long-haul air travel. Therefore, the aviation industry is looking to renewable synthetic fuels, which it calls Sustainable Aviation Fuels (SAF), to achieve net zero in the future.

What are the advantages and disadvantages?

The study “E-Fuels – The potential of electricity-based fuels for low emission transport in the EU” analyzes the future energy demand of the European transport market as well as the necessary development of renewable energy capacities and the related investments required to achieve an 80-95% reduction of greenhouse gases. The following advantages and disadvantages could be identified:

What we need to do now

All means of transport should be electrified or partially electrified wherever environmentally and technically feasible. E-fuels will be crucial for transport applications for which electric powertrains are currently not readily available. That is why policymakers and industry must now create the framework conditions that make e-fuels economically attractive.

Policymakers and industry need to design a strategic agenda for technology research, market development and regulation of e-fuels. A cross-sector platform for e-fuels could initiate and coordinate this process in the near future.

E-fuels are currently in the demonstration and very early market penetration phase. An appropriate regulatory and economic framework is essential to guide more investment in fuel production efficiency and accelerate market penetration. From an economic perspective, the transport sector could play the key role as it does not directly face the problem of carbon leakage and customers are more inclined towards environmental sustainability.

We at magility will continue to monitor the development of synthetic fuels. We will be happy to keep you up to date on this.

Do you have any questions? Then please contact us at any time. Also feel free to follow us on LinkedIn to never miss any news.