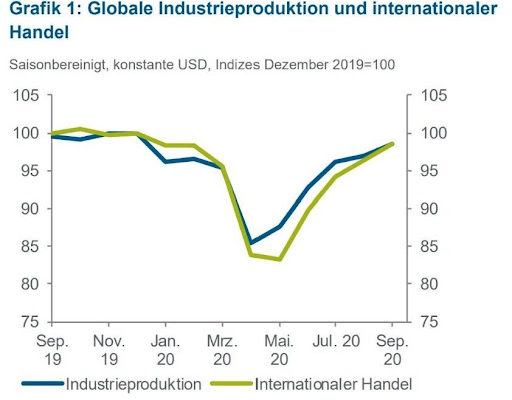 Developments in the global economy are also having an impact on German SMEs. As part of global value chains, it can hardly escape declines in demand and interruptions in production abroad. And is therefore not only affected by the measures to contain the virus at home.

It is true that the dependence of the German economy on individual countries appears to be rather low. Overall, however, more than one-fifth of the services for domestic consumers, companies, the public sector and the export economy come from abroad. Moreover, dependence on foreign value added is likely to be highly sector-dependent.

Of the total global services offered by the German economy, 76.6 percent come from domestic value added. By contrast, 23.4 percent comes from abroad. Of this, in turn, less than half (around 10 percent) comes from other EU countries. The USA accounts for 2.3 percent, China for 1.9 percent and the United Kingdom for 1.4 percent of the services provided, taking into account domestic value added:

As expected, dependence on foreign suppliers is particularly pronounced in mining, at 84.6 percent. Agriculture and forestry, including fishing, also obtain almost half of their value added from abroad, at 45.2 percent. In construction and services, dependence on foreign suppliers is below average at 16.8 and 15.7 percent, respectively, but still not negligible. If the domestic orientation of construction services is taken into account, the data show that a construction project worth 100 million euros purchases services worth around 1.6 million euros each from the USA and China.

Due to the current Corona crisis, domino effects with dramatic consequences for German prosperity are now expected. The reason for this are trade barriers, which have been erected above all for supplies and medical goods.

The extent to which the German economy is interwoven with global trade is made clear in a study by the Institute of the German Economy (IW). Among the major industrialized nations, Germany is more intensively integrated into international supply chains than any other country: If the openness of an economy is measured by the ratio of trade volume to gross domestic product (GDP), the Federal Republic of Germany’s degree of economic integration is 88 percent. One of the highest values in the world.

What we can learn from the crisis

The Corona crisis has had a massive impact on us. It also has significant consequences for corporations, their value chains and also on transfer pricing, which in some cases has to change very significantly in order to remain competitive.

Accordingly, in general, affected companies should consider the possible impact of adjustments in their value chains and take early action to minimize tax and compliance risks in order to best manage the crisis.

In general, one can only speculate at present about the extent and duration of the economic impact of this pandemic. German companies fear not only the loss of exports to China, but also a disruption of their own value chains: Because employees can no longer perform their work – due to illness, limited mobility or even fear. The lack of inputs from China or other countries is also an obstacle to production. The coronavirus is a demand and supply shock.

The internationalization of production and the accompanying division of labor have led to significant efficiency gains in the economies involved. Advance inputs in international value chains, the mutual transfer of technology or the exchange of knowledge via employees in multinational companies have also increased production possibilities and prosperity in Germany.

If, on the other hand, pandemics were to occur more frequently, this would sooner or later lead to permanent production shocks in the case of pronounced dependencies. Relocations back to domestic or other foreign locations would be the consequence. The partial renunciation of the advantages of the international division of labor would be justified by the associated minimization of risks from production dependencies. However, efficient internationalization leads to a diversification of risks – including the reduction of national dependencies. In this respect, international value chains should be examined primarily in terms of their sustainability and not per se.

Sustainable effects on the global economy are conceivable if economic crises of manageable duration are used as a pretext for a politically motivated dissolution of international cooperation. The argument of a restructuring of international production potentials as a result of epidemics or pandemics must also be placed in the current political framework. This is often characterized by protectionist and autarkic thinking. In many cases, the maxim of political action is not the interdependence of countries and the resulting benefits in terms of prosperity and cooperation, but the decoupling of national economies and the pursuit of economic and political independence. There is therefore a risk that COVID-19 will become another knock-out for globalization in the long run.

Structural change in value chains depends heavily on companies. One measure, for example, could be to diversify supply chains to increase resilience to production failures in upstream products.

According to Galina Kolev, an economist at IW and an expert on world trade, government intervention in market activity should only be considered in areas that are of great importance for the basic supply of the population with, for example, basic foodstuffs or medical products. National compartmentalization is not a way out, he said.

We at magility will continue to monitor the impact of the Corona crisis on value chains and the economy in general. We will be happy to keep you up to date on this.

Do you have any questions? Then feel free to contact us at any time. You are also welcome to follow us on LinkedIn to make sure you don’t miss any news.