Hydrogen (H2) in the focus of the industries

Jules Verne wrote in his book “The Mysterious Island” as early as 1874: “Water is the coal of the future. The energy of tomorrow is water, which has been broken down by electric current. The elements of water broken down in this way, hydrogen and oxygen, will secure the Earth’s energy supply for the foreseeable future”.

Old technology is catching up

The production of hydrogen (H2) by electrolysis was already discovered in 1800. The fuel cell, which converts H2 into electricity, was invented by Sir William Grove together with Christian Friedrich Schönbein as early as 1838. Due to the invention of the electric generator in 1867, also called dynamo machine, which was much less complex than the hydrogen-based technology, H2 technology was forgotten.

In 1990 the technology got a boost again in the automotive industry when the Californian Air Resources Board (CARB for short), whose main task to this day is air pollution control, introduced a “Zero-Emission-Program“. The program required car manufacturers to build at least two percent of all new cars to be emission-free by 1998; by 2003 the quote was to rise to ten percent.

The current climate targets also light the massive expansion of H2 technology, which leaves only water behind when burnt and is therefore basically climate-neutral. Research is running at full speed. New H2 storage processes in carrier fluids such as LOHC (liquid organic hydrogen carriers) are being researched, but other production methods are also emerging, such as the plasma analysis process developed by Grafoce or the methane pyrolysis, which was developed by the Karlsruhe Institute of Technology.

It all depends on the color

Almost everyone thinks of H2 in terms of the oxyhydrogen gas reaction in chemistry lessons at school, in which hydrogen and oxygen are produced by electrolysis, and with a bang become water again. A clean process, one might assume. Today, however, most H2 is produced by natural gas reforming, a thermal, non-climate neutral process used in large-scale chemistry. Even the production of hydrogen by electrolysis is only clean if the electricity is produced from renewable energies.

Colours provide information about the way hydrogen is produced: 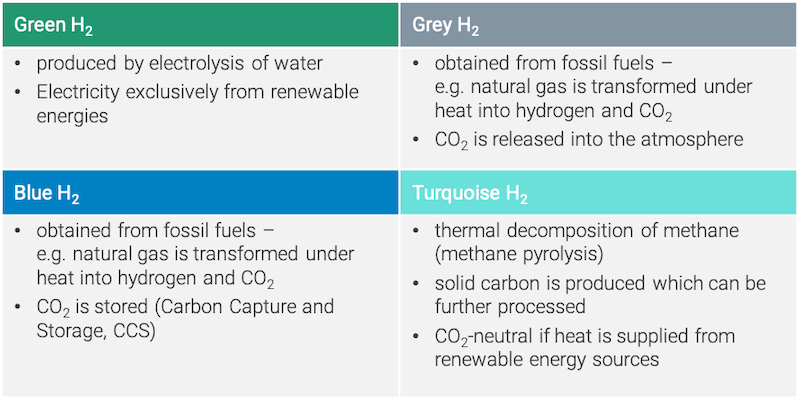 Hydrogen is the most common chemical element in the universe and, due to its excellent storage capacity, is predestined for use as an energy store. It is always produced by thermal energy or electricity and is used in

The fuel cell converts hydrogen and oxygen into water. This chemical process is called “cold combustion” because it releases energy.

As an alternative to natural gas or petrol, H2 can also be burnt “hot” in the conventional way. However, it must be taken into account that hydrogen has a higher flame velocity than e.g. natural gas, which requires a modified combustion technology to keep the flame stable and recoil-free. In addition, hydrogen burns hotter than natural gas or petrol. The hotter combustion causes the nitrogen (N) in the ambient air to react with the oxygen (O) and to become nitrogen oxide (NOx).

Nitrogen oxides are responsible for the formation of ozone in summer and also contribute to fine dust pollution.

The possible uses of H2 as a potentially climate-neutral energy storage medium are growing steadily, making the gas interesting for many applications.

The automotive industry offers fuel cell cars and is developing solutions to use H2 directly in the combustion engine. The Toyota Mirai and Hyundai NEXO, for example, rely entirely on hydrogen fuel cell technology, while the Mercedes-Benz GLC F-CELL is a hybrid vehicle with combined hydrogen and battery technology. The company “KEYOU” is taking a different approach. It offers hydrogen combustion engines for commercial vehicles. Fast refueling times, the weight advantages over battery technology and long ranges speak in favour of hydrogen here. H2 is also used for alternative drives and e-fuels. The term Power-to-X (PtX) plays an important role here.

Green hydrogen will always be more expensive than electricity because electricity is needed to produce it. However, its energy-storing properties make it attractive nonetheless. In the power grid, the electricity generated must also be consumed at the same time to avoid damage or breakdown due to frequency fluctuations. This is ensured by cross-border networking and regulation. Renewable energies are generated depending on wind and sun – this means that they are not always available and cannot be regulated uniformly. This is precisely where hydrogen comes into play as a storage medium, as it can be used to store excess wind and solar energy. Wind turbines that stand still despite the wind will soon be a thing of the past.

However, if one considers the pure efficiency of the long H2 production and use chain, which produces H2 from electricity, compresses the hydrogen, transports it and converts it back into electricity with the help of a fuel cell, one can speak of an energy destruction cascade. This is due to the fact that only 20% of the original energy is retained. At the same time, however, there is a chance to use at least 20% of the electricity that might have been unused before.

Hydrogen as a promotional mecca

The German Federal Government is currently struggling with the question of which hydrogen color is considered to be climate-neutral and is revising the National Hydrogen Strategy, which aims to dovetail climate, energy, industrial and innovation policy. The aim is to make Germany an international pioneer in the field of hydrogen and to achieve and secure long-term world market leadership in hydrogen technologies.

However, regardless of whether green, blue or turquoise hydrogen is involved, the funding landscape for projects in this field is highly developed. More than 300 million euros are available for this up to 2023 just from the Climate Fund. Funding quotas of 40-50 % are granted. Funding is available for fuel cell vehicles in local public transport, trains and ships with fuel cell drive, publicly accessible hydrogen filling stations in road transport, fuel cell systems for self-sufficient energy supply of critical or off-grid infrastructures and fleets of industrial trucks with fuel cell drive.

Hydrogen will change many industries and will often contribute to the emergence of new business models. Feel free to contact us to find out which business models are suitable for your company in connection with hydrogen. We will be happy to find out together with you whether your company’s investment in hydrogen technology is worthwhile and together we will develop the potential that is available to your company in this area.

Recent posts
High tech comes from the foot of the TeckThe transformation of the automotive industry enters the next stageBuilding Material 4.0 – Megatrend Sustainability